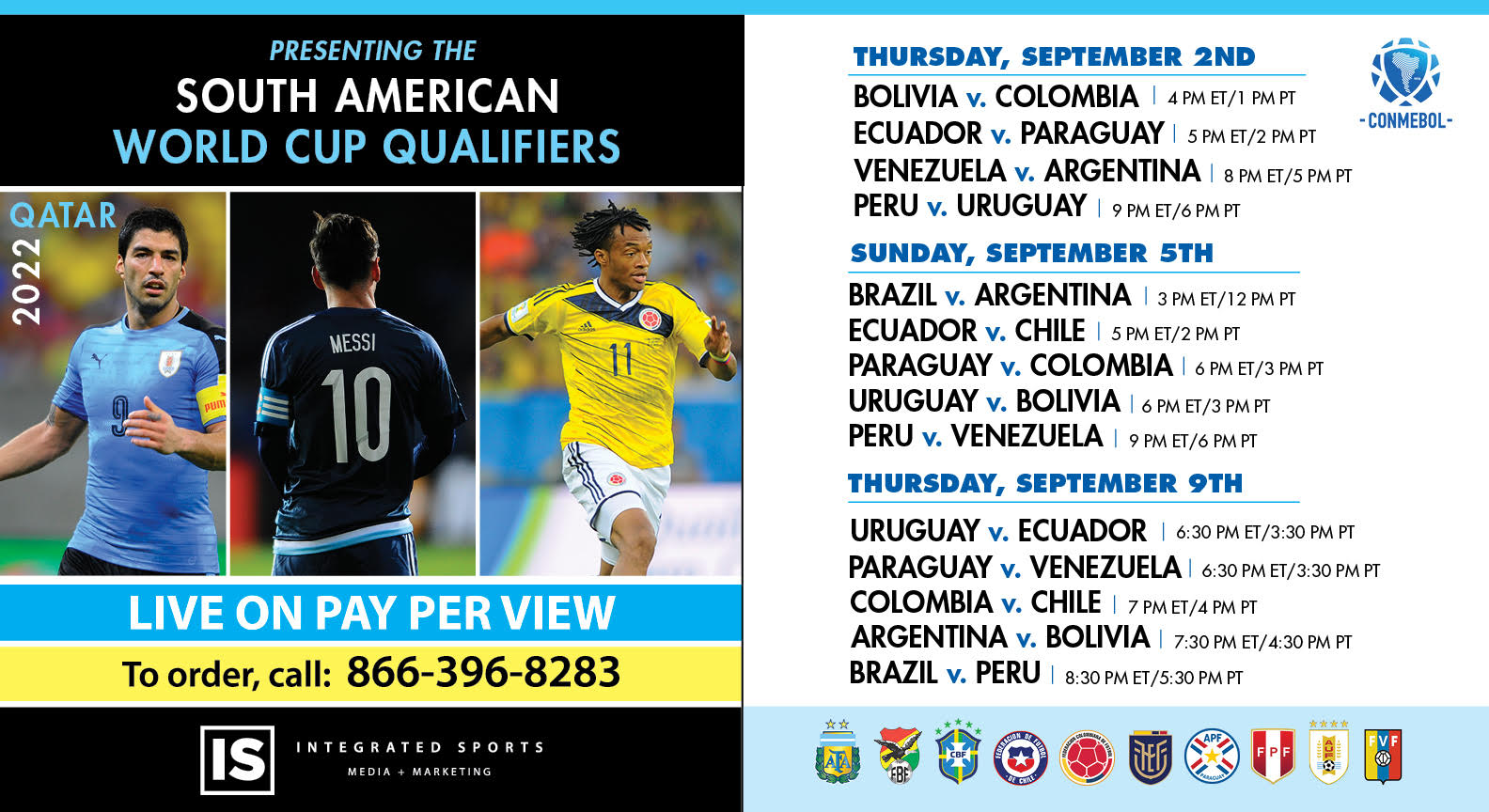 TENAFLY, N.J. (August 23, 2021) -- The often-delayed South American World Cup qualifyingmarathon is set for Rounds 9, 6 and 10 (the original matchday numbers) in September andIntegrated Sports Media, the leader in pay-per-view soccer matches, has got the gamescovered for you.

Integrated Sports will offer matches on cable and satellite Pay Per View and to commercialestablishments across the U.S. The matches, which cost $29.95 each, also continue to beavailable on cable via iN Demand along with satellite providers DIRECTV and DISH.

The 10 nations involved in qualifying for the 2022 World Cup in Qatar have played only sixmatches each because games have been postponed several times because of the coronaviruspandemic that has ravaged parts of the South American continent. In addition, in MarchEuropean clubs declined to release players for qualifiers because of the danger of contractingthe virus while traveling internationally. Now, however, FIFA has ended those temporaryexclusion rules and will require clubs to release players for international duty.

To compensate for the recent postponements, CONMEBOL, the regional governing body, hasannounced that the qualifiers in September and October will be triple matchdays (spread over11 days in each month), which were approved by FIFA. In all, South American nations andplayers could be asked to play a dozen international matches over the next seven months -- in addition to their global club commitments.

The round-robin qualifying tournament calls on each nation to play home and away againstnine opponents for a total of 18 matches, which will send the top four qualifiers to Qatar witha fifth nation involved in an intercontinental playoff.

Because of the delays and postponements, qualifying in South America will spill over intoMarch 2022, with the World Cup finals slated to begin in the Middle Eastern nation in lateNovember. The tournament will run from Nov. 21 to Dec. 18, 2022.
“The changes in the calendar seek to minimize the burden of travel and avoid complications inthe busy schedule that South American football has this year,” CONMEBOL said in a statementon its website.

The highlight of the three rounds of games will be on Sunday, Sept. 5 when Brazil hostsarchrival Argentina in a rematch of the recent Copa América final. Brazil (6-0-0, 18 points), No. 2 in FIFA’s latest world ranking of national teams, sits atop the table with a perfect recordand a staggering 16-2 goal differential. Argentina (3-3-0, 12 points), ranked No. 6 by FIFA, wonthe twice-delayed Copa América tournament hosted by Brazil, and is currently locked intosecond place. The match will also pit the new Paris St.-Germain teammates -- Lionel Messiand Neymar -- against each other for the first time since Messi left Barcelona for the French powerhouse.

While perennial powers Brazil and Argentina are expected to ease their way to Qatar, the battle for the two other automatic qualification spots (and the lone playoff berth) is likely to be fought among five nations -- Ecuador, Uruguay, Colombia, Paraguay and Chile.

So far, Ecuador (3-0-3, 9 points) has been the surprise of the qualifying tournament. After an opening loss to Argentina, La Tri, ranked No. 55 by FIFA, won its next three matches (beating Uruguay, Bolivia and Colombia) before dropping its next two (to Brazil and visiting Perú). Uruguay (No. 13) and Colombia (No. 15) have identical records (2-2-2, 8 points) with La Celeste holding the edge on a narrow goal differential. Paraguay (1-4-1, 7) and disappointing Chile (1-3-2, 6) have ground to make up and still have more than half the games still to play in the current qualifying tournament. Venezuela (1-1-4, 4), sitting ninth in the 10-team table, was thrown into additional turmoil in mid-August when its Portuguese coach José Peseiro walked away from his post leaving the team further adrift and facing upcoming against Argentina, Perú and Paraguay. He claimed that he had not been paid for the past year.