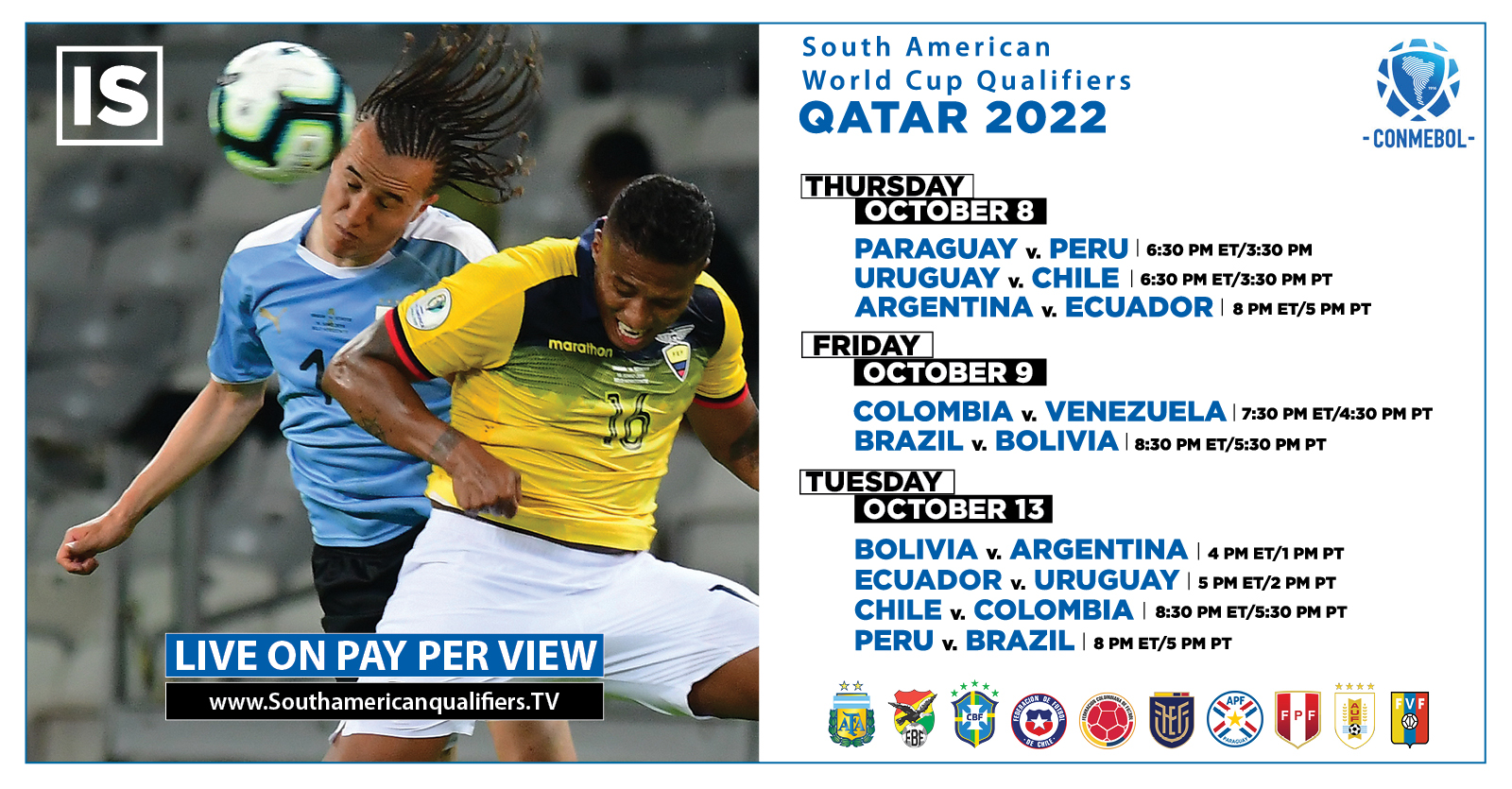 TENAFLY, N.J. (Sept. 28, 2020) – The delayed South American World Cup qualifying marathon is set to begin on Oct. 8 and Integrated Sports Media, the leader in pay-per-view soccer matches, has got the games covered for you.

Integrated Sports Media is distributing nine games over Round 1 (Thursday, Oct. 8 and Friday, Oct. 9) and Round 2 (Tuesday, Oct. 13). The qualifying process, which has been delayed since last March because of the global coronavirus pandemic, will send four nations directly to the 2022 World Cup in Qatar, with a fifth berth up for grabs in an intercontinental playoff.

The South American qualifiers will be available live in the United States on cable and satellite TV, and digital PPV for a suggested retail price of $29.95 per game via iN Demand, DIRECTV, DISH, or streaming online at FITE-powered sites: www.eliminatorias.TV and www.SouthAmericanqualifiers.tv or by downloading the FITE.TV app.

One match -- Paraguay v. Venezeula match on Oct. 13 -- will be carried Live by a network to be announced.

On Oct. 8, the slate of qualifiers in the Quest for Qatar will begin when Uruguay is scheduled to host Arturo Vidál and Chile at the fabled Estadio Centenario in Montevideo at 6:30 p.m. Eastern. Gareca and the La Blanquirroja will then take the field as Perú travels to Defensores del Chaco Stadium in Asunción to play Paraguay, with coverage starting at 6:30 p.m.

“Getting off to a winning start would be good, but it’s vital to stay focused the whole tournament and to put in a good sprint finish,” Perú Coach Ricardo Gareca said.

The day’s games will conclude when Argentina faces Ecuador at La Bombonera in Buenos Aires at 8 p.m.

“These qualifiers are really tough,” said Roberto Ayala, an Argentine assistant coach. “You have to play everyone and the calendar is what it is. It would be good to get off on the right foot, but it’s a long road. We need to be competitive and to enjoy it.”

The next day, Oct. 9, Colombia will entertain Venezuela at Estadio Metropolitano Roberto Melendez in Barranquilla at 7:30 p.m. before Brazil hosts Bolivia at Arena Corinthians in São Paulo at 8:30 p.m.

“It’s a long and winding road,” Brazil Manager Tite said about the qualification process. He added, “It’s a very demanding competition tactically and technically, but it’s also a mental challenge, too.”

The five-time World Cup champion Seleçáo has not won the title since 2002, Brazil’s longest drought between World Cup titles since Pelé led Brazil to the championship in 1958.

Bolivia’s coach, César Farias, said the delay caused by the virus has enabled him to focus and prepare.

“Confinement has allowed us to keep developing,” he said. “We’ve been working a lot, researching, exchanging knowledge with colleagues, chatting daily with the players. We took advantage of the time – it was like an intensive course in elite coaching.”

The schedule (all times Eastern) for Rounds 1 and 2 follow: