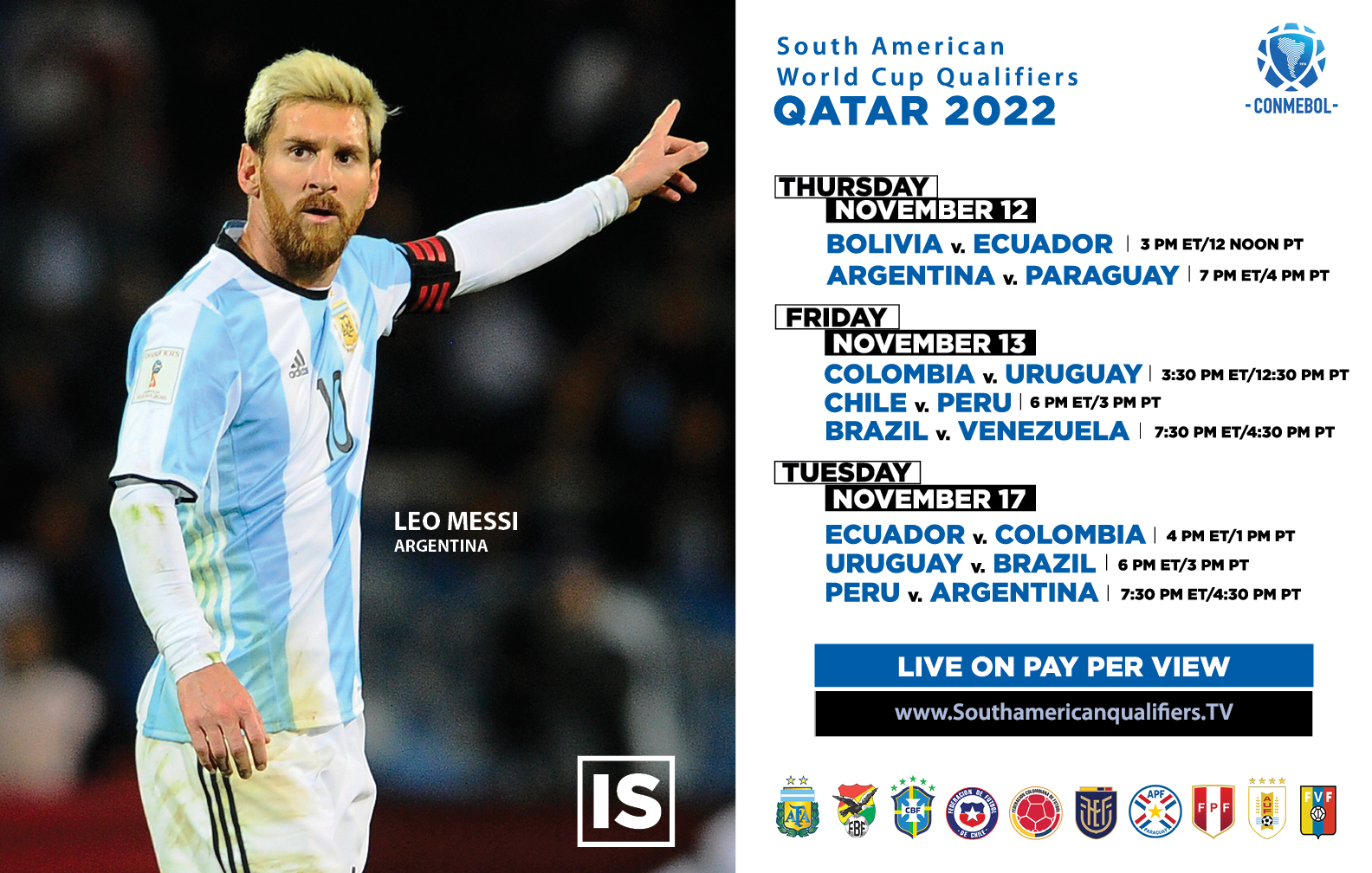 TENAFLY, N.J. (October, 2020) – The delayed South American World Cup qualifying marathon is set for Rounds 3 and 4 the second week in November and Integrated Sports Media, the leader in pay-per-view soccer matches, has got the games covered for you.

Integrated Sports Media is distributing eight games over Round 3 (Thursday, Nov. 12 and Friday, Nov. 13) and Round 4 (Tuesday, Nov. 17). The qualifying process, which had been delayed since last March because of the global coronavirus pandemic -- but that finally began in late October -- will send four nations directly to the 2022 World Cup in Qatar, with a fifth berth up for grabs in an intercontinental playoff.

The South American qualifiers will be available live in the United States on cable and satellite TV, and digital PPV for a suggested retail price of $29.95 per game via iN Demand, DIRECTV, and DISH, or streaming online at www.eliminatorias.TV or by downloading the FITE.TV app. Additional digital PPV outlets include the GolTV Play app, Unio.TV and the Onefootball app. Two matches -- Paraguay v. Bolivia and Venezuela v Chile on Oct. 17 -- will be carried by a network to be determined.

The two perennial powerhouses in South America -- Brazil and Argentina -- opened their Quest for Qatar each with a pair of victories, winning once at home and once on the road. Though the two countries are atop the 10-team standings, Brazil owns the early edge having scored 9 goals and allowing 2 (plus-7) while Argentina edged to consecutive one-goal wins (1-0 and 2-1).

The Seleção started in grand fashion in an emphatic 5-0 win over visiting Bolivia, then trailed twice at Peru before Neymar struck for a hat trick in a 4-2 victory. The five-time World Cup champion Seleçáo has not won the World Cup title since 2002, Brazil’s longest drought between championships since Pelé led Brazil to the crown in 1958.

Argentina slipped past Ecuador, 1-0, as Lionel Messi, playing in his 140th international match, converted a penalty kick. La Albiceleste then had the enviable task of playing at altitude in Bolivia, coming away with the 2-1 win on a 79th-minute winner from substitute Joaquin Correa, which ended Argentina’s 15-year drought in La Paz.

“This is a big win at altitude, where victories are always harder to come by,” Messi said. “We’ve still got a lot to do. The qualifiers have only just started and we’re delighted to come away with these two wins.” The game was the first time in seven World Cup qualifiers that Argentina had managed to get a victory without Messi -- its captain -- scoring a goal.

In the next two rounds, Brazil hosts Venezuela, which failed to take a single point from its first two games; then travels to Montevideo to face Uruguay, which defeated visiting Chile, but then stumbled in a 4-2 loss at Ecuador. Argentina hosts Paraguay, which sits in a tie with Colombia in second place after a draw against Peru and a win at Venezuela. Argentina then travels to Peru to close out play in Round 4. Perhaps the most tantalizing matches of the next two rounds involve Uruguay (3 points), which will play at Colombia (4 points) on Nov. 13 then host Brazil in Montevideo on Nov. 17. After defeating visiting Chile, 2-1, Uruguay fell behind Ecuador, 4-0, before Luis Suárez converted two late penalties in the surprising 4-2 loss.

Because of the postponements as a result of the coronavirus pandemic, the marathon South American qualifying tournament, in which each team plays 18 games, will not be completed until March 2022 -- only months before the start of the 2022 World Cup in Qatar.

The schedule (all times Eastern) for Rounds 3 and 4 (home teams listed first) is as follows: