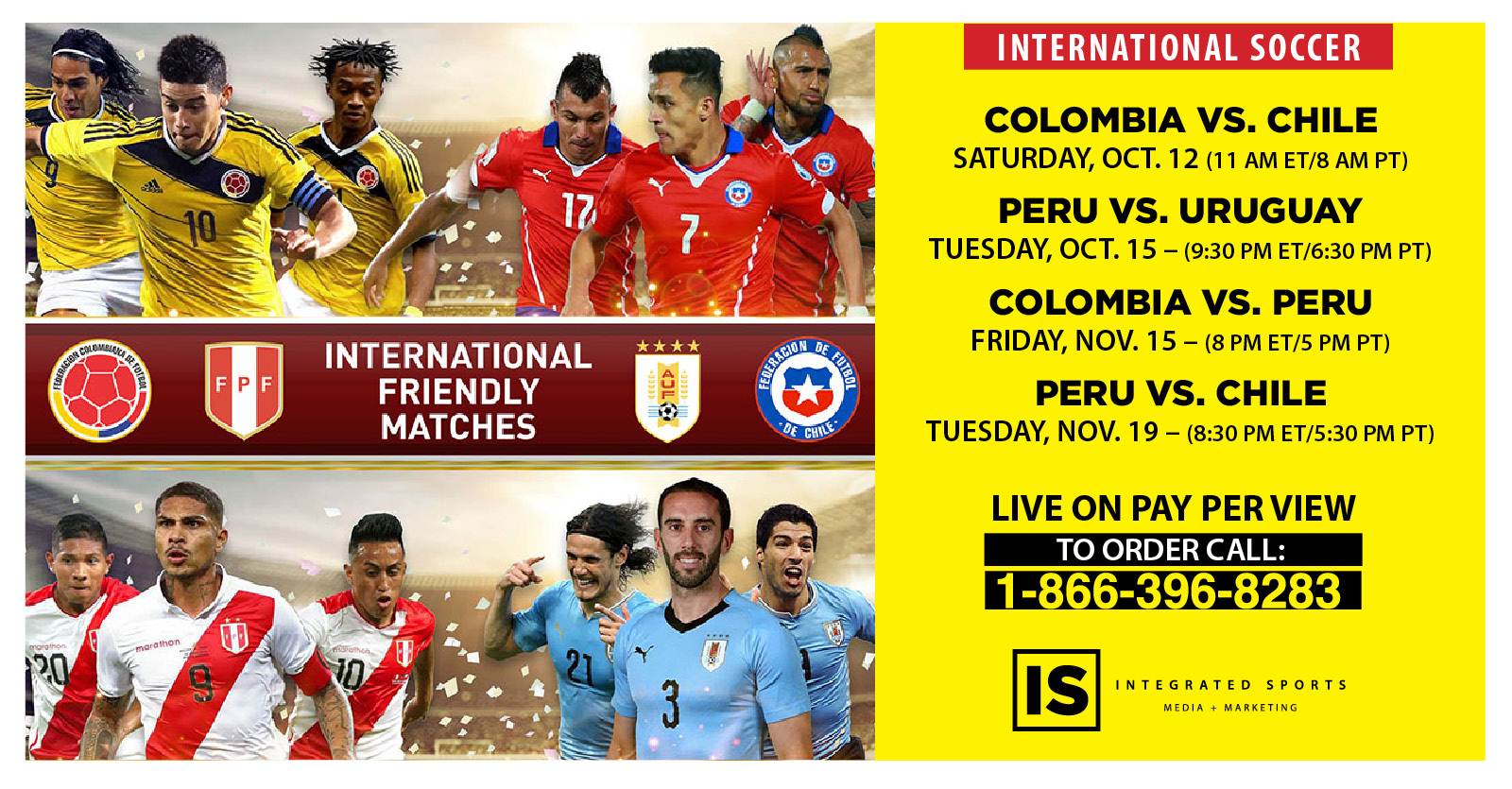 TENAFLY, N.J. (October 1, 2019) – Integrated Sports, the leader in pay-per-view soccer matches, will distribute four live international friendlies, featuring four South American countries during the FIFA windows in October and November, as nations ramp up their preparations for qualifying matches ahead of the 2022 World Cup in Qatar.

The four matches will feature two teams -- No. 6 Uruguay and No. 9 Colombia – that are among the Top 10 in the most recent FIFA World Ranking.

The quartet of games kicks off on Saturday Oct. 12, with a match between Colombia and Chile at José Rico Pérez Stadium in Alicante, Spain, at 11 a.m. (Eastern). Three days later, on Tuesday, Oct. 15, Perú, the runner up in this past summer’s Copa América tournament, will host Uruguay at the Estadio Nacional in Lima, at 9:30 p.m. (Eastern).

The action shifts to the United States in November’s FIFA International Window when Colombia and Perú clash at Hard Rock Stadium, in Miami Gardens, Fla., on Friday, Nov. 15, at 8 p.m. (Eastern). The four-game series on pay-per-view will conclude on Tuesday, Nov. 19, with a game between Perú and Chile from the Estadio Nacional in Lima, at 8:30 p.m. (Eastern).

Integrated Sports Media will distribute all the matches live in the United States on cable and satellite PPV via iN Demand, Vubiquity, DIRECTV and DISH for a suggested retail price of $24.95 per game. In addition, all matches are available via digital Pay Per View at www.Payperviewliveevents.com.

A skillful Uruguay team went on the road in September for two friendlies -- a 2-1 victory at Costa Rica and a 1-1 draw against the United States in St. Louis. La Celeste, a two-time World Cup champion (1930 and 1950) boasts a star-studded lineup, led by the controversial and irrepressible Luis Suárez, striker Edison Cavani, the youngster Brian Rodríguez and the veteran goalkeeper Fernando Muslera.

The summer of 2019 has been a difficult one for Chile’s national team. La Roja crashed out of Copa América after a shocking 3-0 loss to Perú in the semifinals. That was followed by a loss to Argentina in the consolation match. Things did not get much better during September’s international window as Chile traveled to Los Angeles for a 0-0 draw with Argentina; then was humbled by host Honduras in a 2-1 loss in San Pedro Sula. The recent stumbles have seen Chile drop three places in the FIFA World Ranking, to No. 17. But with veteran players like Alexis Sánchez, Claudio Bravo and Arturo Vidal, Chile is always a threat -- and an entertaining one at that.

Colombia, currently No. 9 in the FIFA ranking has played in the last two World Cups, advancing to the quarterfinals in 2014, and the second round in 2018. Colombia’s top players have found productive outlets among some of the top teams in Europe (Santiago Arias at Atlético Madrid, Juan Cuadrado at Juventus) and Mexico (Edwin Cardona at Pachuca). Still, all the promise and all the expectations have yet to result in a championship trophy for Colombia. Los Cafeteros earned a pair of draws -- 2-2 against Brazil and a scoreless draw against Venezuela -- in two friendlies in September. Colombia was forced to play those games without the injured star striker James Rodriguez of Real Madrid.

Perú, ranked No. 19 by FIFA, went 36 years between appearances in the World Cup (1982 in Spain, then 2018 in Russia). After years in the wilderness of international soccer, Perú ousted favored Uruguay in a quarterfinal shootout at the Copa América in Brazil, and then stunned Chile in the semifinals before succumbing to the hosts in a spirited final.