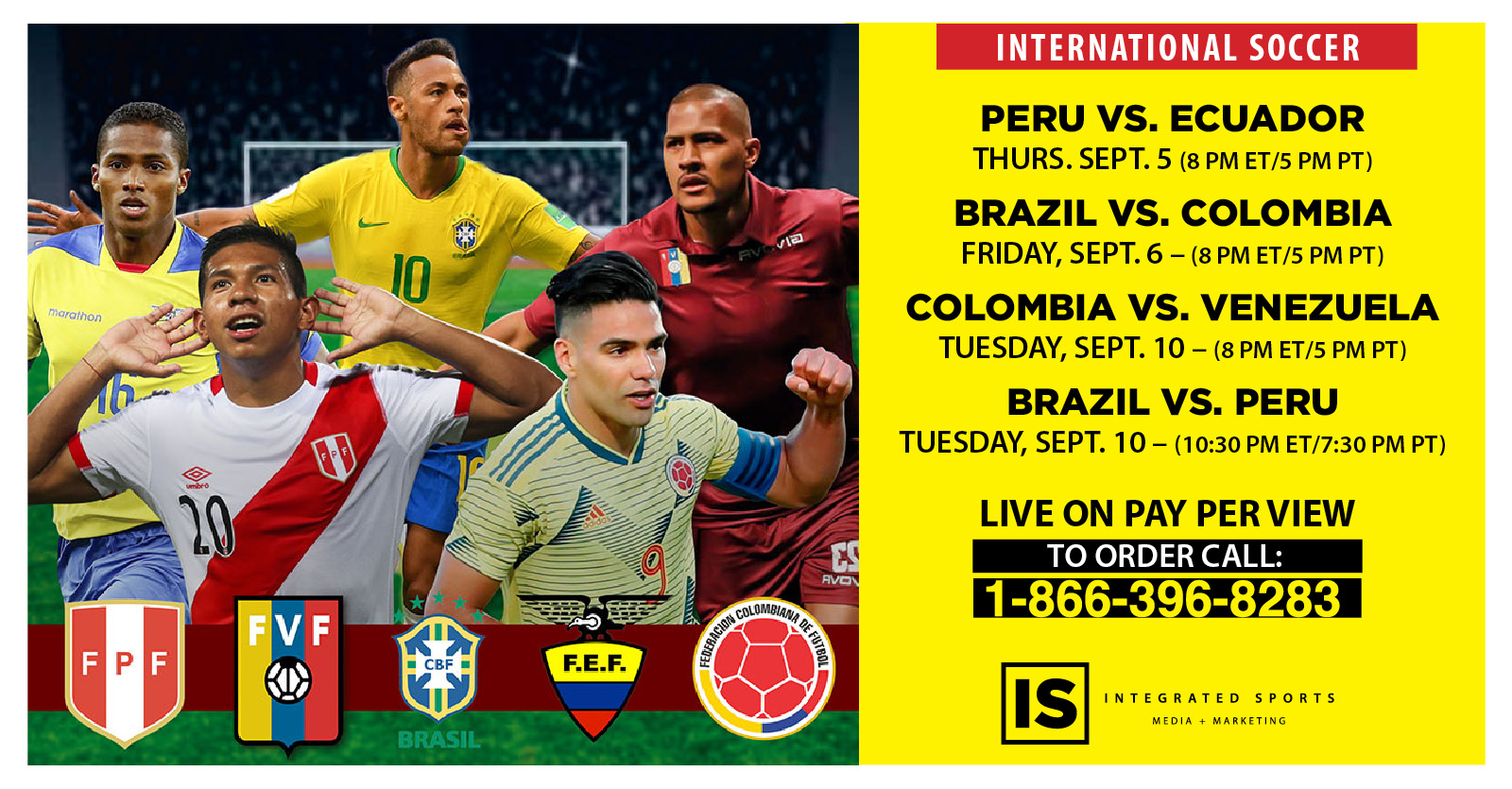 Perhaps the highlight of the quartet of games will be twomatches in the Brazil Global Tour, when Neymer-led Seleção faces Colombia atHard Rock Stadium in Miami Gardens, Fla., on Sept. 6; followed by Perú in arematch of the 2019 Copa América final Sept. 10 in the Los Angeles MemorialColiseum.

Integrated Sports is presenting the two Brazil pa Per Viewgames in partnership with beIN SPORTS.

The four-game series begins with a match between Perú andEcuador at Red Bull Arena in Harrison, N.J., on Sept. 5. Five days later onSept. 10, Colombia and Venezuela will play at Raymond James Stadium in Tampa,Fla., in what has been billed as The Game of Brotherhood, a reference to themillions of Venezuelans who have fled to Colombia in the wake of continuing economicand political instability at home.

satellite PPV via iN Demand, Vubiquity, DIRECTV and DISH fora suggested retail price of only $24.95 per game. In addition, all matches areavailable via digital Pay Per View at www.Payperviewliveevents.com.

Brazil, which is determined to shine in Qatar in the 2022World Cup and end a 20-year drought in the global championship, placed thefirst building block when it captured the Copa América title on home soil inJune. The five-time champions have not won the World Cup since 2002 in SouthKorea and Japan. Now No. 2 in the FIFA World Ranking (behind Belgium), Brazilunder the guidance of Tite, has retooled with a mix of savvy veterans andprecocious young players. The experienced Dani Alves, who professes a desire toplay in Qatar, was a linchpin in the Copa. Everton Cebolinha charmed fans withhis dribbling at the Copa. The young core is led, of course, by Neymar, aided25-year-old Maquinhos, and Eder Militao, Lucas Paqueta, David Neres and Richarlisonare all in their early 20s. Teenage stars Vinicius Junior and Rodrygo havepromising futures with the national team and their club team, Real Madrid.

Colombia, currently No. 8 in the FIFA ranking after jumping fiveplaces, during the past 10 years has emerged as a challenger to Brazil andArgentina in South American soccer. Los Cafeteros have played in the last twoWorld Cups, advancing to the quarterfinals in 2014, and the second round in2018. Colombia’s top players have found productive outlets among some of thetop teams in Europe (Santiago Arias at Atlético Madrid, Juan Cuadrado atJuventus) and Mexico (Edwin Cardona at Pachuca). Still, all the promise and allthe expectations have yet resulted in a championship trophy for Colombia.

Perú, ranked No. 19 by FIFA, went 36 years between appearancesin the World Cup (1982 in Spain, then 2018 in Russia). In Russia, Perú landedin a difficult first-round group with eventual champion France, Denmark andAustralia, coming away with a win over the Aussies and narrow 1-0 losses toFrance and Denmark. Perú last won the Copa América in 1975, finished third in 2015and advanced to the quarterfinals in 2016. Then came 2019 and Perú’s charmed tournamentin Brazil. After finishing in third place in the group stage (Brazil won thegroup), Perú ousted favored Uruguay in a quarterfinal shootout, and stunnedChile in the semifinals before succumbing to the hosts in a spirited final.

Ecuador has played in three of the last five FIFA World Cups,advancing to the group stage in Germany in 2006. Ecuador has shown signs oflife with the strong play of Enner Valencia (Tigres UNAL) and veteran AntonioValencia (Manchester United and now LDU Quito). But it is obviously time torebuild the roster after a disastrous performance at the Copa in which Ecuador,which has fallen to No. 66 in the FIFA ranking, could garner only a singlepoint from its three first-round games, finishing at the bottom of Group C. Twoof the teams younger players -- Xavier Arreaga (24) and Jhegson Méndez (22) --play in Major League Soccer for Seattle and Orlando, respectively.

Venezuela, La Vinotino, has long been the poor soccer sisterof South America but displayed a newfound confidence and skill while earningfirst-round draws against Perú and host Brazil, before beating Bolivia toadvance to the Copa’s knockout stage. Venezuela has never qualified for theWorld Cup finals, and its best showing in Copa América was a third-place finishin 2011. Currently No. 26 in the FIFA ranking, Venezuela has sent a number ofplayers to Major League Soccer, including Ronaldo Peña (Houston), JeffersonSavarino (Real Salt Lake), Rolf Feltscher (Los Angeles Galaxy) and JosefMartínez (Atlanta United).