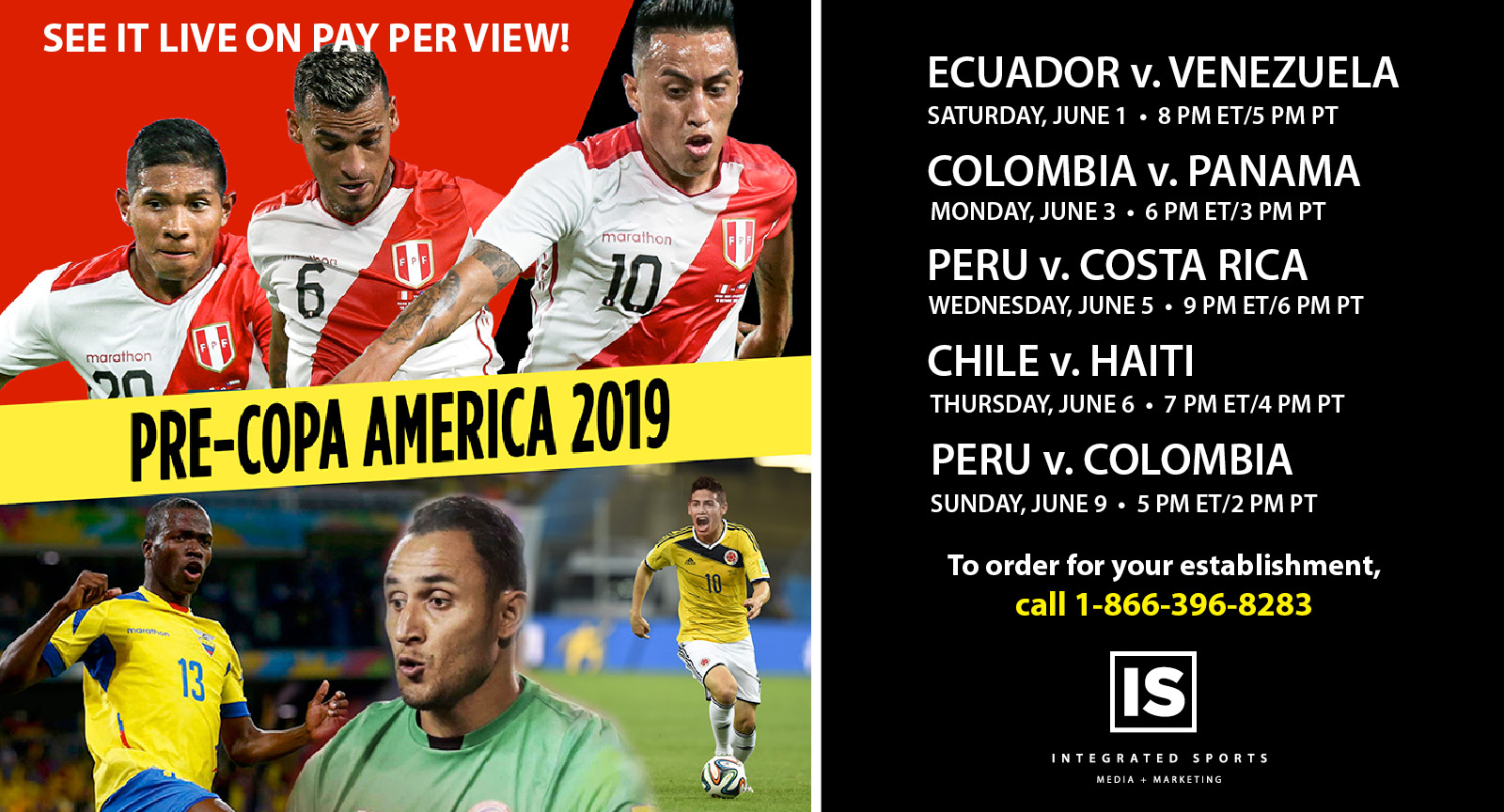 TENAFLY, N.J. (May 1, 2019) -- Integrated Sports Pay Per View, the leader in pay-per-view soccer matches, will broadcast live five international soccer friendly-matches during the June FIFA Window as nations prepare for the 2019 CONCACAF Gold Cup (with matches in the United States), and the 2019 Copa América (to be played in Brazil) and qualifying matches for 2022 World Cup (to be played in Qatar).

Integrated Sports Media will distribute all the matches live in the United States on cable and satellite PPV via iN Demand, Vubiquity, DIRECTV and DISH for a suggested retail price of only $24.95 per game. In addition, all matches are available via digital Pay Per View at www.Payperviewliveevents.com.

The games feature five of the 10 South American nations that comprise CONMEBOL, the regional federation.

Ecuador has played in three of the last five FIFA World Cups, advancing to the group stage in Germany in 2006. With Hernán Dário Gómez back in charge (he took El Tricolor to the 2002 World Cup, Ecuador’s first), Ecuador has shown signs of life with the strong play of Enner Valencia (Tigres UNAL) and the elegant veteran Antonio Valencia (Manchester United). Venezuela, La Vinotino, has long been the poor soccer sister of South America. Venezuela has never qualified for the World Cup finals, and its best showing in Copa América was a third- place finish in 2011. Currently No. 29 in the FIFA ranking, Venezuela has sent a number of players to Major League Soccer, including Ronaldo Peña (Houston), Jefferson Savarino (Real Salt Lake), Rolf Feltscher (Los Angeles Galaxy) and Josef Martínez (Atlanta United).

Chile is the two-time defending champion (2015 and 2016) of Copa América, winning the Centenario event by defeating Argentina at MetLife Stadium in East Rutherford, NJ. Chile has appeared in nine World Cup finals, though it failed to qualify for the most recent event, 2018 in Russia. Reinaldo Rueda joined as the team’s coach after the failure to qualify and has begun to integrate younger players into a proven core that includes Alexis Sánchez (Manchester United), midfielder Arturo Vidal (Barcelona) and defender Gary Medel (Besiktas).

In the last decade, Colombia, currently No. 12 in the FIFA ranking, has emerged as a power in South American soccer. Los Cafeteros have played in the last two World Cups, advancing to the quarterfinals in 2014 and the second round in 2018, where they were ousted in a shoot- out by England. Colombia’s top players have found productive outlets among some of the top teams in Europe (Santiago Arias at Atlético Madrid, Juan Cuadrado at Juventus) and Mexico (Edwin Cardona at Pachuca).

Proud Perú, ranked No. 21 by FIFA, went 36 years between appearances in the World Cup (1982 in Spain, then 2018 in Russia). In Russia, Perú landed in a difficult first-round group with France (the eventual champion), Denmark and Australia, coming away with a win over the Aussies and narrow 1-0 losses against France and Denmark. Perú last won the Copa América in 1975, finished third in 2015 and advanced to the quarterfinals in 2016.

The three CONCACAF nations -- Costa Rica, Haiti and Panama -- all will be preparing for the 16-team Gold Cup tournament (which begins in mid-June) and the start of qualifying for the 2022 World Cup. Los Ticos have played in four World Cups and finished third in 2017 edition of the Gold Cup tournament; Panama qualified for its first World Cup when it emerged from the region to advance to the finals in Russia in 2018 where Panama failed to win a game and scored a single goal (in a 6-1 loss to England); Haiti, which played its lone World Cup in 1974 (West Germany), last appeared in the Gold Cup in 2015, when it advanced to the quarterfinals.