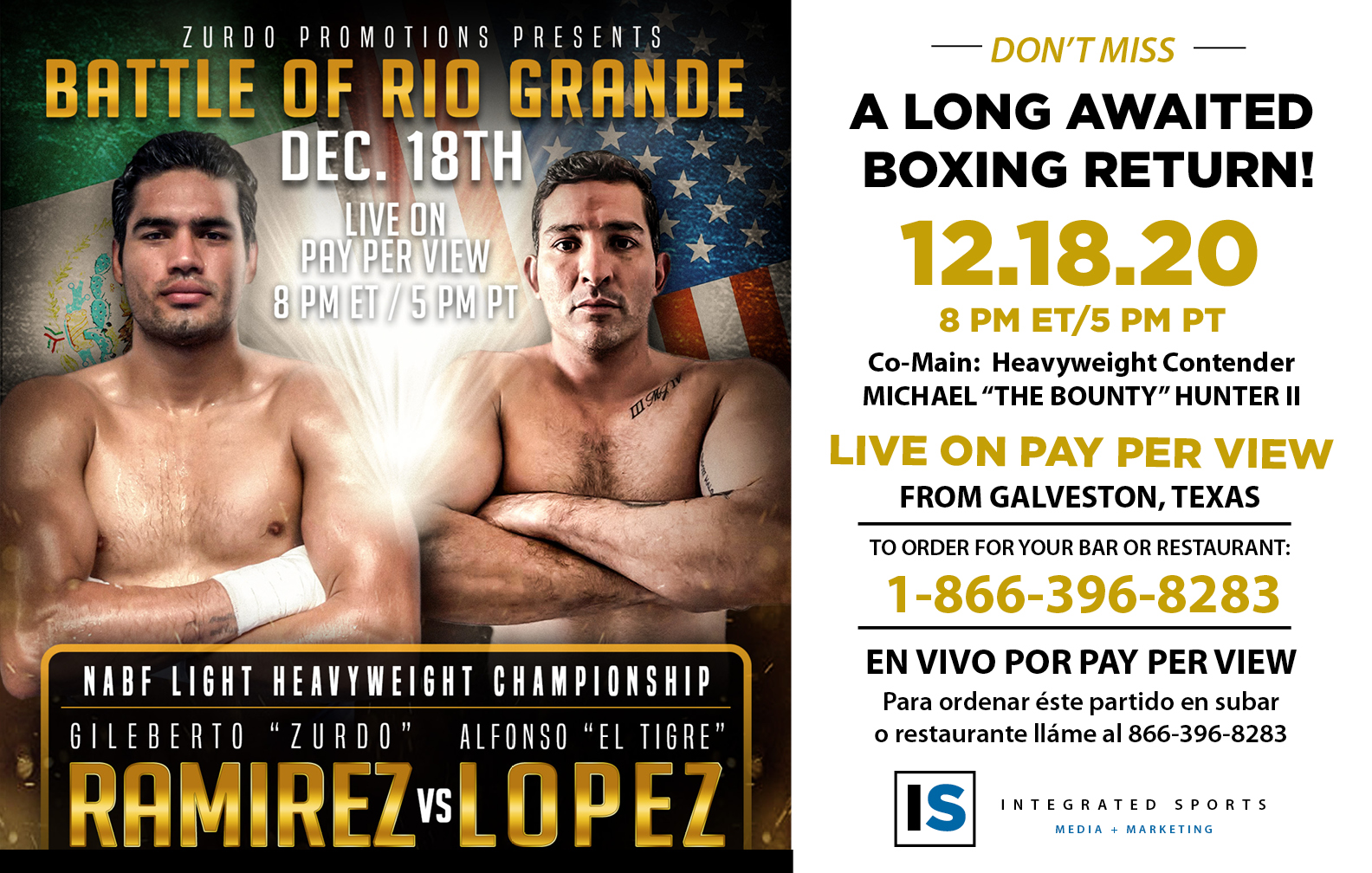 “Battle of Rio Grande” will be available for live viewing on digital, cable and satellite, starting at 8 p.m. ET / 5 p.m. PT, on pay per view for a suggested retail price of only $24.99. FITE TV will stream worldwide on the FITE app and website (www.FITE.tv) and Integrated Sports Media will distribute throughout North America via DirecTV, iN Demand, Vubiquity, and DISH in the United States, as well as in Canada on Shaw and SaskTel.

The main event fighters, Ramirez and Lopez, are co-promoters of “Battle of Rio Grande” under their promotional company names, respectively, Zurdo Promotions and El Tigre Promotions.

Ramirez’ last fight, his first as a light heavyweight, was last April in Los Angeles, in which “Zurdo” stopped 29-6-1 Tommy Karpency in four rounds. Ramirez then became a promotional free agent.

Lopez will be fighting close to his home in Huntsville, Texas. “El Tigre” will be riding a 10-fight win streak into the ring for the Dec. 18th 12 round main event. He hasn’t fought in 13 months, registering a 10 round decision over 19-9-1 Denis Grachev in Lopez’ first defense of the NABF title he captured in his previous fight with a fourth-round stoppage of 21-3 Alex Theran.

“I’m looking forward to hosting my first fight and appreciate all the support and love I’ve received from everybody,” Ramirez said. I want to give special thanks to FITE.TV, El Tigre Promotions, Be Def Sports, and the state of Texas for being great partners in this event. I know it’s been a long road to return, but I feel great having full control of my career and being able to fight whenever, wherever, and however, I want. As always, I appreciate my trainers - Julian Chua, Joel Flores, and Chris Wong - keeping me in shape since my last fight and I feel better than ever to step back in the ring. I’ll see you guys December 18th in Texas!”

Hunter is rated among the top 10 in all four major sanctioning bodies -- #4 International Boxing Federation (IBF), #7 WBO, #10 WBC and World Boxing Association - in addition to being ranked # 8 by The Ring independent magazine.

Hunter’s last action was a 12-round split draw a year ago in Saudi Arabia with Alexander Povetkin (35-2), the former world heavyweight champion and 2004 Olympic gold medalist. A decorated U.S. amateur boxer, Hunter’s lone loss as a professional was a 12-round unanimous decision in 2017 to another Olympic gold medalist (2012), defending champion Oleksandr Usyk(11-0), for the WBO World cruiserweight title.

Additional fights will soon be announced. Card subject to change.